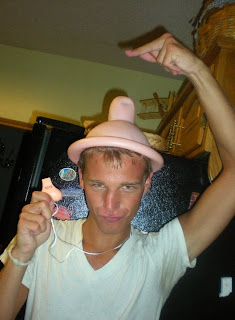 This is me being incredibly lazy and posting basically pictures with captions then a recipe. Maybe a rating if I get my shiiii together.

I made this awesome cake cause I got an awesome square pan and made my own awesome chocolate frosting and took it to an awesome party where my awesome friends didn't even eat it. AWESOME.

So I took it home and did THIS 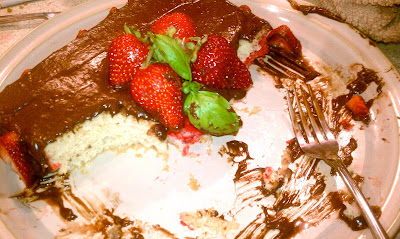 don't underestimate my stomach, I told you there is a monster.
and yes, that is basil, not mint. all my AWESOME drunk friends didn't know the difference.
Rating
★★★★ out of ★★★★
Just because I'm saying it got all stars possible, doesn't mean it was the best i've ever had. Yeah, the thing was freaking good. Obiviously. I ate it all. I think the frosting made it the best.
The cake was suuuuuuper moist and fluffy and what white cake should be.
I hope I can remember where I found the recipes.. 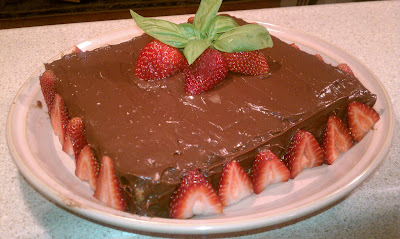 
Sift the flour, baking powder, baking soda, and salt into a medium bowl and set aside.
In a large bowl, using an electric mixer on medium speed, beat the egg and yolk and sugar until thickened and lightened to a cream color, about 2 minutes. On low speed, mix in oil and vanilla until blended. Mix in sour cream until no white streaks remain. Mix in the flour mixture until it is incorporated and the batter is smooth.
Bake at 350 degrees until cake/cupcakes test done
Simple and good.
Frosting
idk where I even found this frosting
1/2 cup butter1/4 cup shortening1/3 cup unsweetened cocoa powder2 cups confectioners' sugar2 tablespoons milk1 cup hot fudge topping
1 teaspoon vanilla extract
Cream together the butter or margarine with the shortening. Sift the cocoa with the confectioners' sugar and add to the creamed mixture. Mix together adding 1 tablespoon at a time of milk to keep mixture smooth. Don't add more than 1/4 cup of milk. Add the hot fudge topping and the vanilla extract. Blend until smooth and creamy.
Apparently the frosting yields 4.5 cups. I literally had enough to ice maybe 2.5 cakes. So prolly go halfsies on it.
Prepare yourself for my next post. It's rude.
Posted by Annie Baker at 9:35 PM

Annie Baker
there is a monster that lives inside of me; a cookie monster